The History of Santa Claus 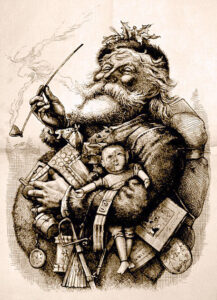 The spirit of Santa Claus is deeply embedded within the traditions of many cultures across the world. His roots grew from the ancient rituals of winter solstice and saturnalia. The Scandinavians celebrated Jul (Yule), from the Norse word for “wheel,” celebrating themes of hope, renewal, redemption and the victory of light and life over dark and death. Traditions of gift giving, ornaments, evergreen, and celebration emerged. The Yule log, representing the embodiment of the sky-father Odin, would be a tradition carried all throughout Europe. The Celtics had the Oak King and the Holly King. The Oak King ruled from winter solstice to summer solstice, and the Holly King ruled from summer solstice to winter solstice. Each of these rituals were sparks to the  tale of jolly merriment. The most notable legend of Santa Claus is that of the Bishop of Myra.

It begins when a child named Nicholas is born in the town of Patara in modern day Turkey, in the year 280 AD, to an affluent family. Nicholas is orphaned at a young age when his parents both die from disease. As he grows older, Nicholas immerses himself deeper into his faith. One day, Nicholas learns that his poor neighbor is struggling and is faced with the possibility that he will have to sell his daughters into servitude to keep them from starving. Nicholas gathers some of his family’s gold, disguises himself in a cloak, and tosses a purse of the gold coins through his neighbor’s window. Upon the third time of committing this act of kindness, the old man chases him Nicholas down and recognizes him. He thanks him profusely, but Nicholas instructs him to tell no one of his generosity.  Nicholas eventually becomes the Bishop of Myra, and after his passing, the stories of his generosity emerge.  He eventually is recognized by the church as  St. Nicholas, and. He  grows to become the patron saint of many causes including sailors, children and pawnbrokers.

By the mid fifteenth century, Greece, Germany, Belgium, Austria, Italy, and Switzerland also adopted St. Nicholas as a patron saint. Around the Middle Ages there are accounts of him visiting children on the eve of his feast day, December 6th, leaving toys, sweets, and fruits on the doorsteps in France and western Europe. Soon he begins climbing through windows and down chimneys, leaving gifts in shoes and stockings. In the far north he is spotted riding a large white horse while dressed in the red or white robes of bishops to deliver gifts. This account is similar to the ancient stories of Odin riding an eight-legged flying horse named Slepner, watching over the nine worlds, including elves. St. Nicholas’s light shines so bright, not even the Protestant Reformation could put out his flame, though they tried. In these darker times, old folk demons from the Austrian Alps go hand in hand in the telling of his tradition. The most famous demon is Krampus. A large, hairy creature with cloven hooves, long goat horns, and a forked tongue that would descend from the mountains on St. Nicholas Day Eve to instill terror in all the naughty children in fear of the worse.

St. Nicholas takes on different faces for different cultures England, France, and Italy went on to embrace St. Nicholas as Father Christmas, moving his visit from his feast day (December 6th) to Christmas Day. He is depicted in old and worn, green or red robes, trimmed with white fur, decorated with little bits of holly or mistletoe. Sometimes he wears a floppy fur hat, or a hood. His focus is on promoting peace and good cheer during the Christmas season to heal the damage of the religious fighting. In the Netherlands, amidst the Protestant ban on Christmas, the south maintains its invitation to St. Nicholas under the title of SinterKlaas. He arrives by boat sometime in November, and tours the country until December 6 spreading good cheer, and giving out gifts and presents to the children. He dresses like a bishop with his red and white robes, tall hat, and his crozier (or staff). He also carries a large book, which contains the names of all the children. The Protestant Germans find their own identity by embracing the title of Christkind. Once they arrive in America, his name shifts to Kris Kringle. It is here where his  appearance takes shape.

In 1681, the Puritans end their ban on Christmas, thus opening gates for St. Nicholas to arrive in America, embodying his forms celebrated upon the land. In 1809, Washington Irving publishes a book honoring the Dutch tradition of SinterKlaas, and shortly after tales of Santa Claus emerge. In 1821, a book called The Children’s Friend becomes the first to report seeing “Santeclaus” traveling through the air in a sleigh pulled by a reindeer. Perhaps most significantly, in 1822 Clement Clark Moore writes a poem entitled, A Visit From St. Nicholas. The poem goes on to paint the image of Santa Claus for generations of families. In 1865, Thomas Nast publishes a drawing called Santa Claus and His Works. Here Santa is found at his workshop at the North Pole, making toys, with a sleigh and flying reindeer, checking his list to see who is  naughty or nice. The Finnish place this workshop in Lapland, near the Arctic Circle. . In time, Santa Claus’s good deeds and message of love and cheer are celebrated around the world. Thanks to a long tradition of mirth, Santa Claus continues to travel the night skies bringing joy to all who believe.

sources: Christmas in New England by Amy Whorf Mcguiggan/ The Story of Santa Claus by Joseph A. McCullough