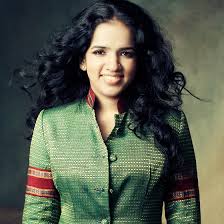 Bindu Subramaniam is a singer/songwriter, entrepreneur, author, and music educator. Bindu has been described as a “third generation prodigy” by the Hindustan Times, “a Bangalore woman changing the way children learn” by Femina Karnatakamagazine, and an “assured young soprano” by The Times of India. She appeared on the list of 12 gen-next achievers in Verve Magazine. She has performed around the world, and her first solo album was critically acclaimed and nominated for a GiMA.

Bindu is the Dean of the Subramaniam Academy of Performing Arts (SaPa), an institute that trains musically inclined children to become professional performers. In 2014, she started the SaPa in Schools program, an initiative to integrate music into the mainstream academic curriculum. SaPa in Schools works with over 25,000 children across India and continues to grow.

She is the daughter of violinist Dr. L Subramaniam, and has collaborated with him on a number of releases including Global Fusion, Visions of India, and Athens.  Along with her brother Ambi Subramaniam, she started a contemporary world music band, SubraMania in 2013. In 2018, she created The Thayir Sadam Project with Ambi, Carnatic fusion artist Mahesh Raghvan, and mridangam player Akshay Ananthapadmanabhan.